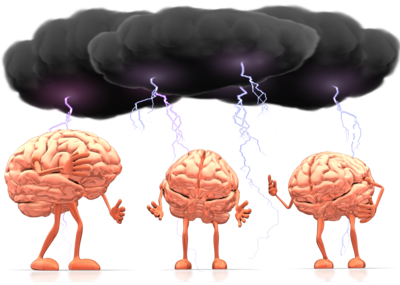 Each of us has experienced a momentary memory loss at times (e.g. mistaking one child’s name for another) due to stress, pregnancy, sleep deprivation, or illness. This isn’t scary until these memory lapses occur more often. However, you should understand that it may not be dementia, it may be your thyroid instead.

Most people are quick to think they have dementia when they simply have brain fog. First, it’s important to define brain fog. It’s the…

“Clouding of consciousness, also known as brain fog or mental fog, is a term used in medicine denoting an abnormality in the regulation of the overall level of consciousness that is mild and less severe than a delirium. The sufferer experiences a subjective sensation of mental clouding described as feeling “foggy”.” ~ Wikipedia.org

When caused by thyroid problems it’s different from dementia. Not only will thyroid medication make a difference here, but so will lifestyle changes. On the other hand, there’s no known way of improving upon dementia today.

What is my thyroid?

Your thyroid gland is a small, butterfly shaped gland found in your neck, right under your “Adam’s Apple.” While it’s small, it’s mighty in function: It determines how your body functions and how you feel. The thyroid also regulates your metabolism (the energy supply that’s essential to all your body’s functions).

A great analogy for this occurs when you think of your thyroid as the fuel pump on your car. When the fuel pump doesn’t work to capacity, the car’s engine doesn’t get enough gas so it runs slowly and inefficiently. If the fuel pump provides your gas tank with too much fuel, your car runs too fast and thus it will eventually burn out.

How’s my thyroid affect my memory?

First of all, you must understand that you’re not alone if you’re having neurological symptoms because of your thyroid. Hypothyroid Mom says 5% of people with hypothyroidism suffer from them. Unfortunately, many medical professionals either underestimate or ignore this.

With this being said, thyroid dysfunction interferes with your body’s neurotransmitter system. This is responsible for communicating information between your brain and your body. When something malfunctions here, you’ll experience physical and cognitive (e.g. memory) problems.

How will my doctor treat my thyroid?

Once your doctor tests the levels of thyroid hormones (TSH) in your blood, they’ll decide if you have hypothyroidism (containing a high level of TSH) or hyperthyroidism (not containing enough TSH). If you have hypothyroidism your doctor will more than likely prescribe a synthetic forms of thyroid hormone, know as Levothyroxine. Once treated your thyroid levels will return to adequate ranges and your cognitive function will improve, so you’ll have no permanent defects. If you’re much older, you may not show as much improvement as a young patient, but you’ll still benefit from treatment as it stops further declination.

On the other hand, if you have hyperthyroidism (occurring more often in women than in men) your doctor will prescribe radioactive iodine. Doctors have used this form of anti-thyroid medication for over 60 years to prevent the thyroid gland from producing too much TSH and it’s considered “safe.”

What if I don’t want to take medication?

Sometimes you just don’t want to rush into taking thyroid medications. In which case you can try changing your lifestyle by:

Exercising daily (This is important when you have thyroid problems.)

Ultimately, you’re in charge of your own health. While it’s important to know how your thyroid could cause you to have memory loss, how you treat this is up to you.